The Big Drive Back

Departing Starigrad on the Friday morning, we expected our journey to take between seven and ten days. The first step was the long winding route back up Croatia’s coastline, in order to save on tolls, do a big Lidl shop, and find a place to change our remaining Kuna back into Euros.

As it happened, we managed all of that and driving 30km through Slovenia without having to purchase another 7-day vignette, and make a decent dent into Italy on the first day. We spent our first night at a free Aire beside a football ground in a small town and were up early in the morning to drive another 500km to Pisa, which was close enough to the route to see.

We found another free Aire in Pisa, just fifteen minutes walk from the tower, but were too done in to contemplate finding a piece o’ Pisa pizza, and were asleep by nine. 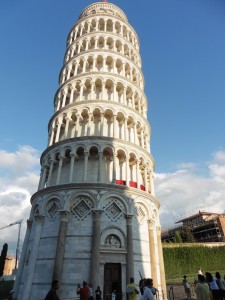 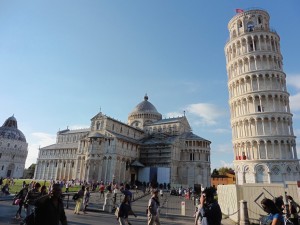 Some random building we saw. Looks like it needed a bit of work.

Italian non-toll routes are decidedly awful. The road surfaces are severely dilapidated to the point where we suspected we were doing damage to Scooby’s chassis. This tied with an intense rain and thunderstorm (which we had to pull over and wait out, unlike the local drivers who seemed content to speed through giant flowing rivers of rain as if there were no risk!), we decided that paying €35 in tolls was better than €300 to a garage when the wheels fell off.

Still, toll roads, smooth and quick as they are, get boring fast and although we eventually reached the French border a lot sooner than planned, we were then faced with more mountain passes to find the Aire we’d chosen. Said Aire, in the pretty town of Sospel, could be seen from the road in both directions, but there were no signs or obvious directions as to how to get to it, not what you want at the end of a long day. After about forty minutes, we spotted a tiny, nondescript unmapped ramp alongside the road that led us down to the Aire which, contradicting the information provided, turned out to be free!

We had to drive back down the mountain in the morning (always worse than the ascent) and had planned to take a look at St Tropez, Port Grimaud, and Sainte-Maxime on the way. All three turned out to be impossible to get to due to grid-locked late-season tourist traffic. Our impatience for queuing got the better of us and we persevered on to a campsite for the night for some much-needed hook-up and a shower outside of the van’s tiny bathroom. 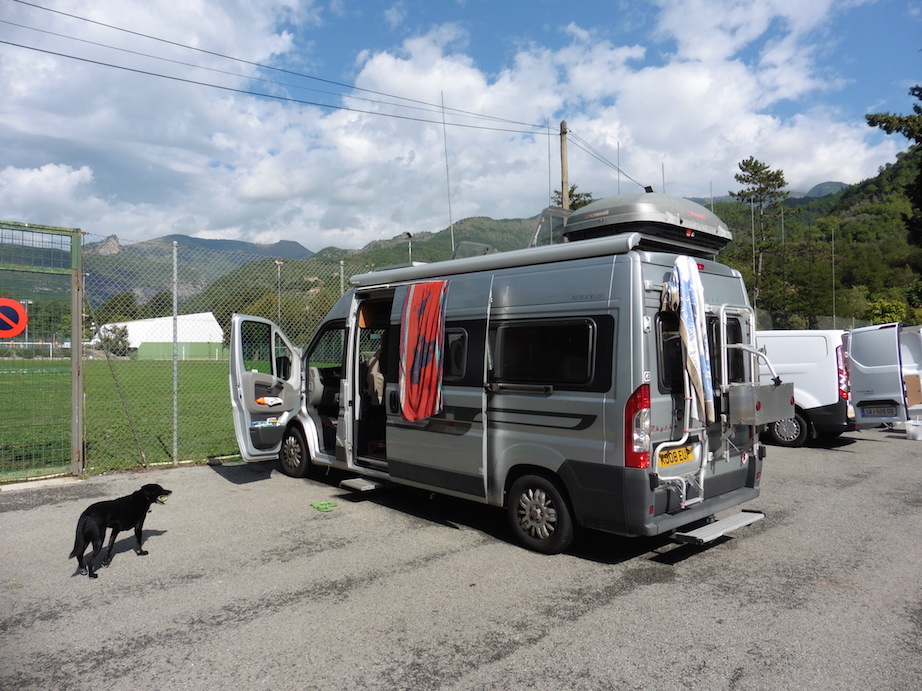 The elusive Aire of Sospel

We reached Cap d’Adge the next afternoon and stayed in an overpriced Aire near the port for the night, next to a British lady who seemed to be seeing the world on her own from an aged motorhome, which was awesome (she must’ve been at least 75). The plan was to camp near the border the next night, and tackle the stressful round-Barcelona route early in the morning.

However, we made such good time on the way down we decided to keep going and at around six-thirty, made it to Torredembarra, the same camp we’d used right back at the start. With only three weeks left before they close for the winter, we were as glad to see them as they were of the business, and we slept soundly for five nights back in a comfortably familiar place.

Eventually, as Andy’s birthday approached, we left bound for Oropesa del Mar, our other ‘second home’ camp, via Castellon where I could raid the giant Carrefour for functional non-space-filling gifts.

This was all back in September, so another two months have crept by with little to no movement. We’ve slept in the pitch nearest the sea, which has provided a lullaby to doze off to for all that time. Next, we move further south towards Portugal.

As Croatia is not part of the Schengen Agreement, for the first time since we’d left the UK, we had to show our passports to an official as we crossed the border. Our first stop was a camp at Rovinj, part of a huge holiday village that was so big it was very easy to get lost in. Swimming in Croatia is thwarted by the need for jellyshoes to avoid urchins (not essential, but advisable) and the craggy shoreline, which means a lot of beaches are just rocky slopes into the water.

Two nights at the camp proved to be enough, as August turned to September, and the families all packed up, the hugeness of the place and distance to walk to everything (including usable wifi) rendered it unworkable, so after a second night we moved down the coast to Pula, where we found a smaller, simple campsite on a jut of coastline. 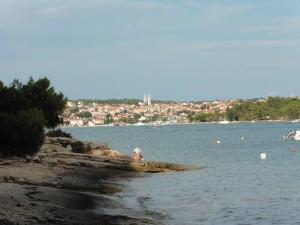 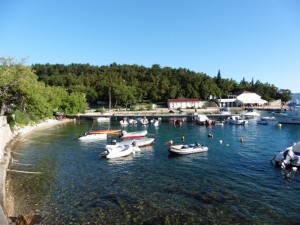 The swimming issues were still partially in place, but the water was enterable without fear of treading on something spiky due to its clarity and the boats moored up that meant the sea floor was smoothed over. Here, I finally got to revisit Scuba diving for the first time since Thailand in 2012. Though the instructor informed me in no uncertain terms not to expect anything on the same scale, I was, as ever, astonished just to be able to breathe underwater, and we found an Anemone with scores of tiny florescent fish living on it.

When we left Camp Runke after five nights, we drove into Pula with the intention of seeing the famous mini-Colosseum, as Rome was off the table due to mileage and Andy’s previous experience of driving in it (“don’t bother!”) Technically we saw it, though as it was a Saturday and there was a festival on, screwed if we wanted to stop! 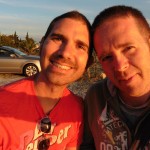 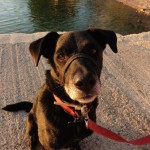 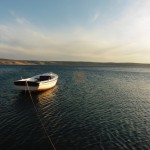 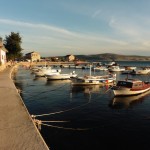 So we headed around the corner, hugging the coastline, in the general direction of Zadar and Split, stopping for two nights at Selce, an adorable town with boats moored up along a gorgeous promenade, winding down from the season. The campground we chose, as seemed to be the case with many in the country, was on an incline and difficult to level the van effectively, but the surroundings made up for it.

Upon departing Selce, we embarked on a long day of zig-zagging coast road. The optimistic nav system estimated about two hours, but the hairpin bends and speed limits that rarely went north of 50kmh slowed things down a lot. Every corner was home to an unspoiled turquoise bay, or a tiny clutch of houses, backed by the looming cragginess of the mountains and, across each bay, any of Croatia’s thousands of islands, looking aridly lifeless from afar, but every now and then a town would appear nestled in a cove. 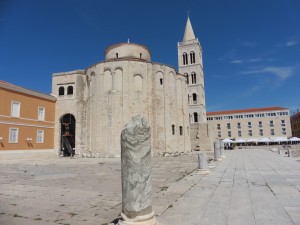 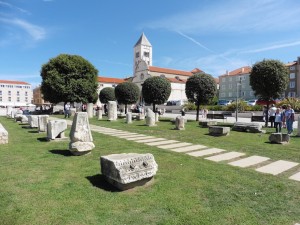 We camped at another hillside location, with pitches rammed between trees at all sorts of odd angles and the nearest thing to a beach so far. The water was still clear, allowing us both to snorkel around looking at the sizeable fish that ventured close to shore.

By this point, we were having to make a decision on a trip back, as the insurance had capped our mileage, if we continued further south to Split, without a ferry crossing to Italy, we’d be cursed with driving the entire length of the country twice.

In Zadar, the next day, we looked into the ferry timetables and the only options were 10-hour overnight crossings, fine if you were allowed anywhere but the deck with a dog. So we explored Zadar’s attractive harbour area, sat on the musical steps (wind and water create a pan-pipe sound), got up close to Roman ruins, and meandered up and down the narrow lanes of olde. 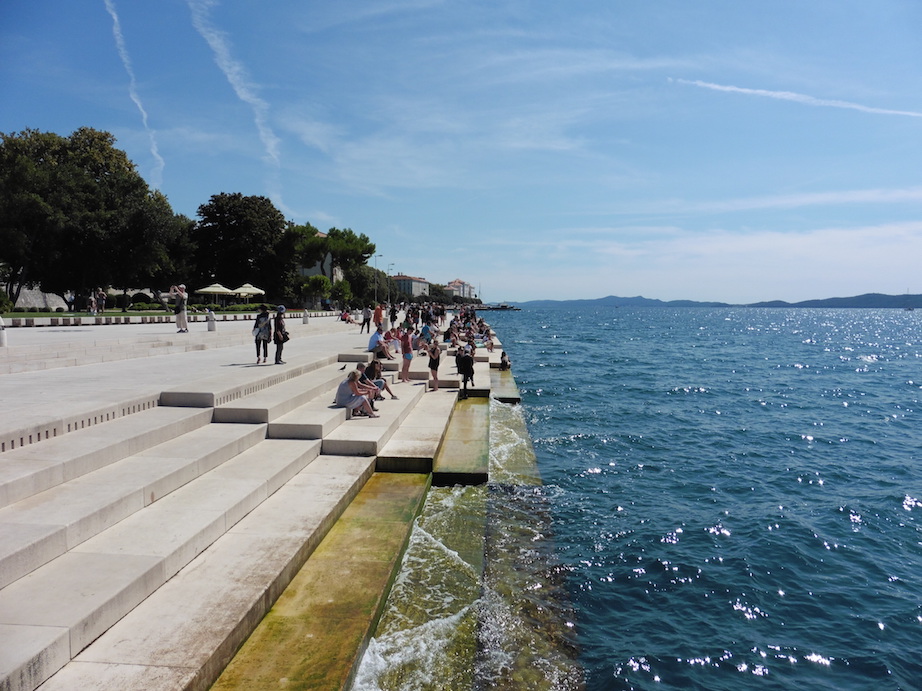 We spent another couple of nights at the camp and made our decision to call time on Croatia after 11 days, and begin the daunting 1,500km, six-day drive back to Spain, where the weather was still like a pristine British summer…

As it turned out, no sooner had we crossed back into Slovenia, the refugee crisis effectively closed Croatia’s borders, resulting in huge waiting times at all crossings.