From the sophistication of Berlin, we travelled south to Bach’s stomping ground of Leipzig for a couple of nights, and then on to Dresden, where we joined a line of wild-camping MH’s along the riverbank and meandered through the architecturally-rich centre of town, and bought some Czech Crowns for our next sector.

The following day we drove across the border and down to Prague, drenched in heavy rain, and successfully found a parking spot near the centre. As we walked in, the clouds gave way to blistering sunshine while we took in the gothic buildings, a guy on a stag-do dressed as a baby trying to get hugs off strangers (British, naturally), and sampled a weird tubular concoction of sweet-bread.

Our attempts to camp in the Czech Republic were less successful and our Nav system took us along a gravel trail a couple of km’s into the forest, which we eventually had to reverse out of, but were thankful of having a van rather than a coachbuilt motorhome, which surely would’ve gotten stranded. When we eventually did find the camp, it was a timewarp back to an era before Hymers and Dethleffs’ – where there were only tents and everyone stared at the strange alien object cruising in. Somewhat mercifully, there were no spaces available and we drove back over the border and found a quiet parking space in the woods for the night. The creepy, dark woods. 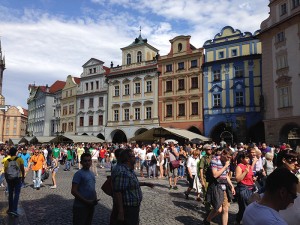 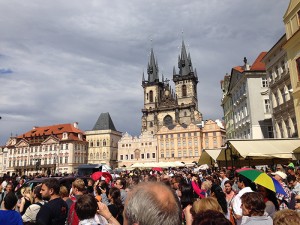 Morning came and we weren’t slain by backwoods psychos, so continued on to Saxon Switzerland (nowhere near actual Switzerland), an exceptionally pretty area of lush greens, waterfalls, streams, and the tallest trees imaginable. We strolled through the forest into town, unable to take Neelix aboard the tram, and hobbled back to the camp after a good 10k roundtrip.

Two days later (one restricted largely to the van due to heavy rain), we ventured further south to the towns of Freiburg and Marktleuthen, via the huge Bastei bridge, a stone monolith of yore that boasts vertigo-inducing views of the valley below. Unfortunately all the history was in German. Soon after we found ourselves venturing back across the border for a second crack at the Czech Republic. Our desired camp, much like our last attempt, was almost impossible to find. Several earthquake-sensation roads later, Camp Karolina appeared on some signs. I admired its initial similarity to Camp Crystal Lake, sans hockey masked lunatic, but we got a good night’s sleep there and spent the remainder of our currency on Sprite, a Mars bar and a heave-inducing local sweet bar called ‘Margot’, which was like sculpting clay covered in chocolate. 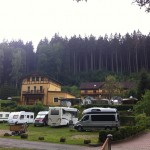 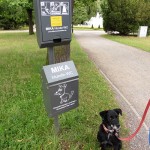 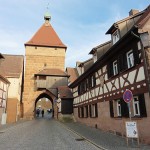 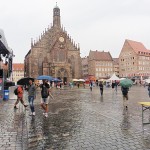 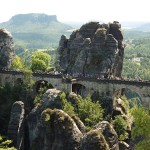 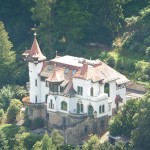 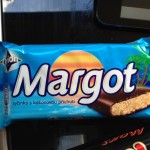 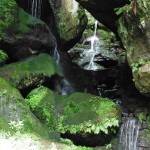 Top row: Our camp at Saxon Switzerland; Neelix with the German ‘Mika’ poo-bag dispenser; around the Bavarian towns of South Germany

Lower row: The Bastei bridge in Saxon Switzerland; one of the Schlosses viewed from the top; the vile Czech excuse for chocolate; a much-hyped but ultimately drab waterfall

From Czech, it was back into Germany in a general southerly direction, via the super cute city of Bamberg. We spent a night at a free Aire in Cadolzburg, serenaded by the sounds of a musical at the local Schloss. The next day we stopped off at Nuremburg, where we happened on another music festival, plus a small gay pride event. We stopped for the night just outside Munich, at Sulzemoos, another free Aire, in the blistering heat, and for the first time five months, we ate a McDonalds. (Neelix sampled a couple of fries and a bit of the burger patty).

The McDonalds dinner proved a mistake as we both felt like crap the next morning and ended up staying at the Aire all day in a haze of fatigue and too much heat.

After our much needed day of rest, we continued south into the postcard landscapes of the Alps, looping around the Austrian border into Sound of Music city Salzburg, and stopping for the night at Bischofsweisen, a free parking area at the foot of a ski resort and stomping ground for cow-bell clad bovine, who just pass through munching on the grass and, if you get close enough, will make an attempt on your clothes too. The chiming of their cowbells provided a soundtrack for much of the evening.

Enjoy the ballad of the ding-dong cows for yourself…

The following day we headed to Berchtsgaden intent on seeing the famous Eagle’s Nest, but were thwarted by the ridiculous prices for the bus ride to the peak (€17 each plus half again for the dog). Weighing it up, we decided against the expenditure, hoping for better vistas over the coming weeks.

We drove slightly disappointedly from the area back into Austria, along the central route towards Innsbruck, where we’d visited a few years earlier, and found an Aire at Schwaz, which turned out to be free due to dysfunctional service machines. It was still in the thirties when we arrived, but the weather had other ideas and ushered in a huge thunderstorm as night fell. 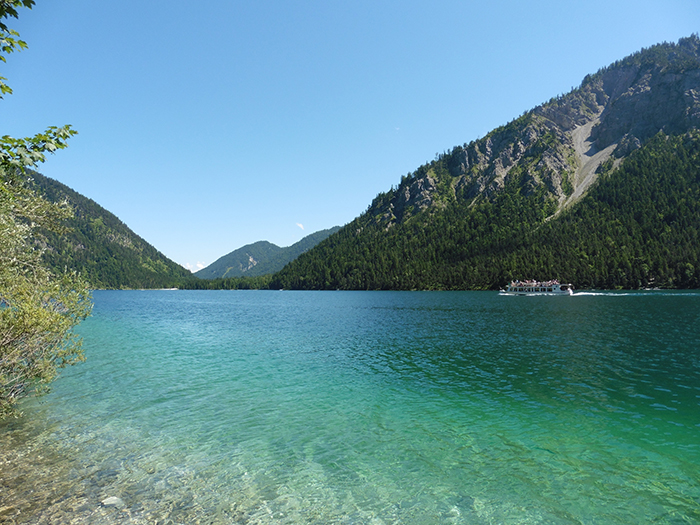 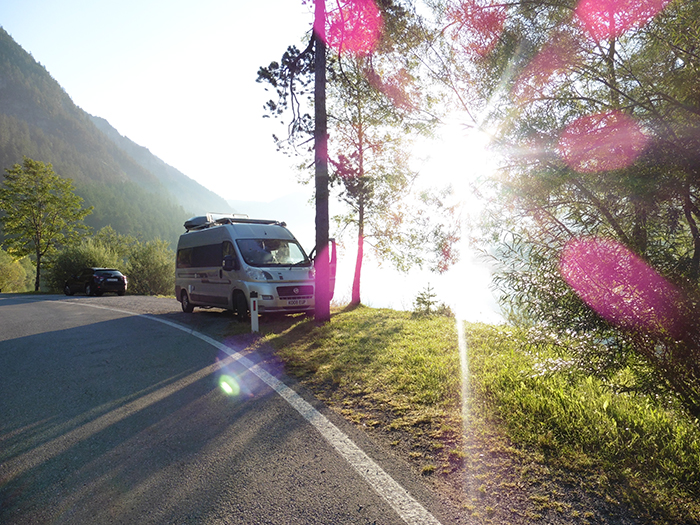 From Schwaz, we re-entered Germany at Füssen to visit the fairytale castle from Chitty Chitty Bang Bang, Nauschwanstein, as well as the manor house at Linderhof. Dogs were, of course, not allowed in the castle, so we settled for the 40-minute uphill hike to see it up close. Aires in this tourist-heavy area were rammed, so we drove back into Austria to wild camp on the shores of Lake Plansee, where we’d passed earlier in the day. The crystal clear water was too inviting to pass up and we both had a dip to cool off as well as another in the morning. 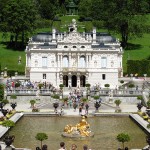 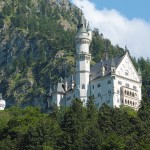 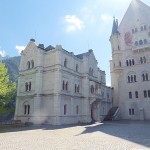 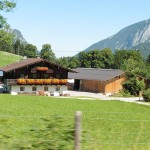 Linderhof Schloss; the enchanting Nauschwanstein castle; and one of many chalets on the road from Germany to Austria

It was almost time to meet up with our friends Sergei and Kevin in Stuttgart, so we headed up the Romantic Road, but found it to be almost anything but. Some cute vistas and chalets, a traffic diversion as well, but the castle was clearly the peak, so we ended up (forced by the diversion) back to our old friend Sulzemoos for the night.

On Friday, we drove a few hours west to Stuttgart where we’d reserved a pitch in a city campsite, just 4km from the centre. The temperature was still roasting, 39 degrees when we arrived. We met up with the boys on Saturday, had steins of beer and Raddler in the park, during yet another of Europe’s let’s-celebrate-anything festival, a picnic by the lake where a wedding was being conducted, and took in some music after dark. 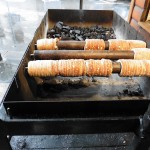 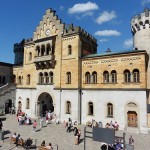 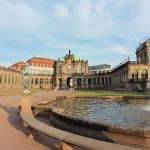 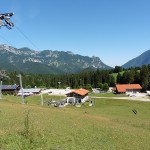 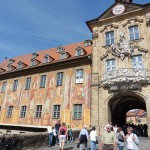 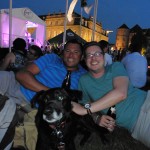 Roasted sweet bread in Prague; the inside of Nauschwanstein Castle; Dresden’s ornate palacy thing; off-season chairlifts at the ding-dong cow Aire; beautiful Bamberg; Sergei and Kevin doting on a demure looking Neelix during the festival of randomness in Stuttgart

As with seeing our other friends and family back in June, it always makes me a tad homesick, although their description of the British summer put paid to that!

Our final day at the camp was spent trying not to move in the mugginess and fantasising of that frosty Austrian lake. Eventually, Mother Nature bestowed upon us an almighty cooling thunderstorm to take the edge off.

Since leaving Germany, we’ve ‘done’ Switzerland, some of Italy – including the Stelvio Pass!, and are now in at Lake Bled in Slovenia, where we rowed a boat around the lake earlier. 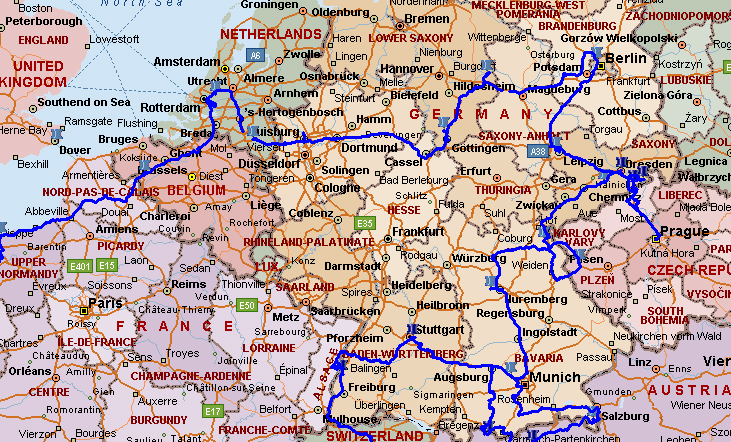