After leaving the muggy Stuttgart, we headed south west through the Black Forest and crossed back into France to pick up some LPG (easier to come by) in the Alsace Region and then journeyed back to a free Aire halfway down towards Switzerland.

In the morning we drove the rest of the way, forking out a costly €42 for the privilege of using Swiss roads. The vignette costs the same regardless of when you buy it, but only runs to the end of the year! Helluva cost for our planned seven days there!

The country’s natural beauty soon won us over and we drove first to Zug, where we found a sizeable lay-by next to the lake, which would become our wild spot for the night. Pretty as it was, Switzerland has so few roads that it was only quiet for about two hours in the middle of the night, seems the commuters started by car/train/bike around 4am! 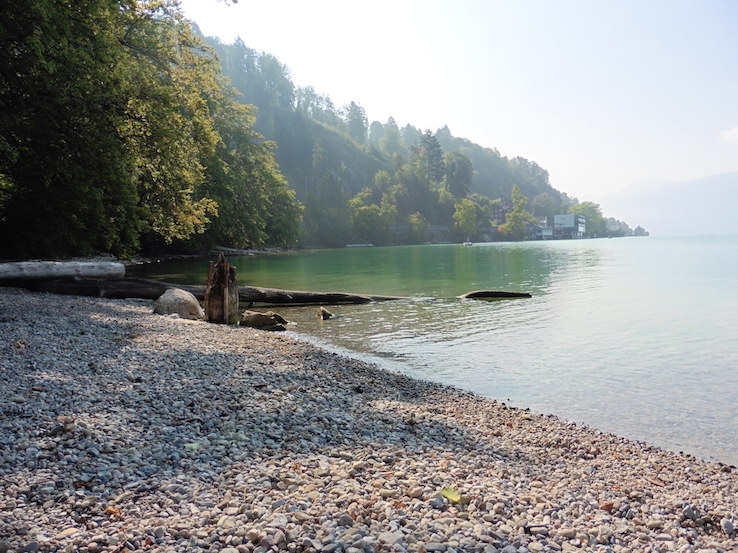 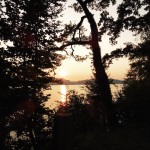 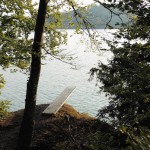 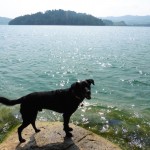 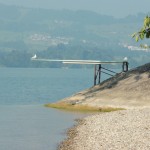 Our wild camping spot at Zug

Unrested, we continued on towards Lake Lucerne, even more stunning than Zug but in a sexy-and-it-knows kinda way. We paid just shy of €50 for one night in a lakeside camp and trekked through the 30 degree heat 5km into town, watching the paddle steamers ferry tourists across the lake, people and dogs swimming, and hordes of Chinese tourists pointing their iPads at everything. 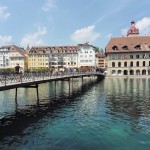 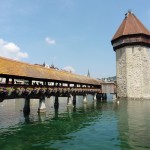 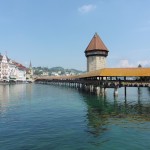 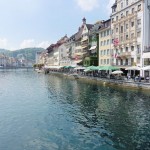 Andy had been to the region several times as a preteen and was prepared for the price shock: The smallest tub of ice cream (thinking cinema sizes here) was €4.50; a bottle of water €3; a cuckoo clock €700! We sprung only for the ice cream, and a steamer ferry back across the lake. Neelix, by now, was over his sunbathing quota for the day and hid beneath the benches on deck. 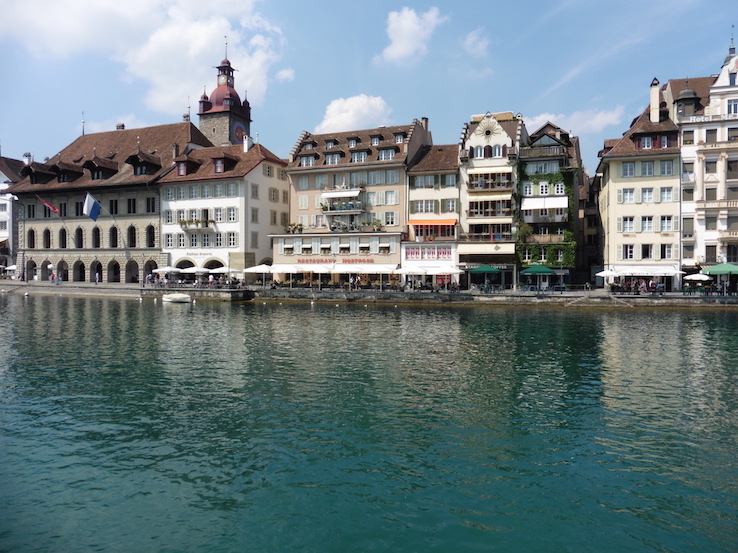 In the morning we forged on in the direction of Lauterbrunnen and Jungfrau (the ‘Top of Europe’) where, again, a night’s camping costs a good €50. More shocking was that the discounted price of a train/cable car up the mountain was €175 each, plus half again to take Neelix. A little web research informed us we could do a similar trip in Slovenia for about €20 each. Sold.

This setback would not ruin our time at Lauterbrunnen, miraculously it was free to hike up to the mountain waterfall (partially inside the mountain). Nevertheless, we cut our planned two nights at Camp Jungfrau in half before we went broke and drove up a huge mountain pass beside a glacier on route to the Italian Lakes… 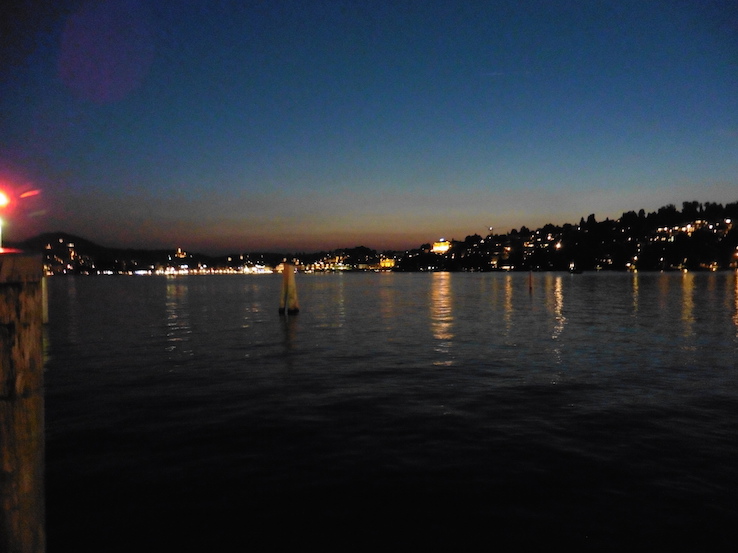 Lucerne by night from across the lake

The chalets, cows, and postcard shots began to wane after we drove through the 17km Gotthard Tunnel towards Lugano, and the Italian speaking region blurred ever more confusingly to the point we couldn’t remember if we’d crossed the border. This has been a common occurrence the more we’ve moved around; architecture and vistas resemble other nation’s archetypes: the southernmost swath of Germany looks Swiss, northern Spain and southern France are similar etc.

What was most telling that we’d reached Italy was the sudden change in driving style: Cars began pulling out in front where there was little to no gap in traffic, overtaking on blind bends, and generally seeming very impatient with pedestrians, mopeds, slow moving camper vans. Yup, we’d reached Italy! 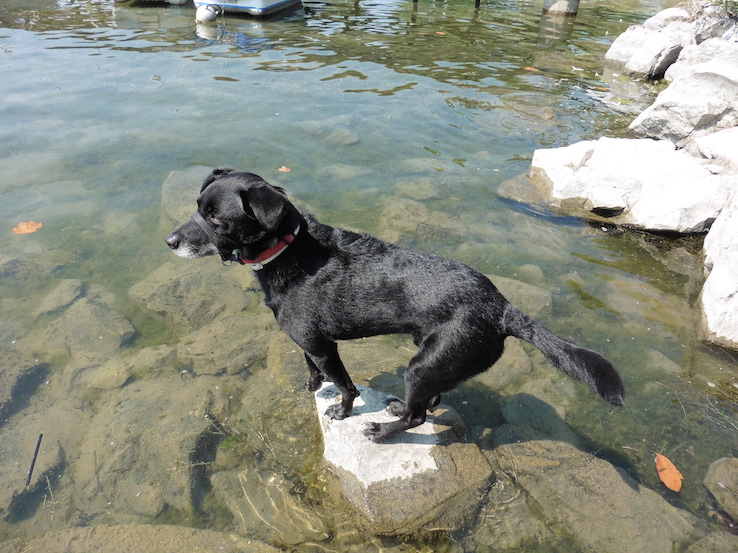 Neelix deciding whether it’s worth a swim

With the driving manners, so too went the quality of roads around the lakes Como and Lugano. Scooby rattled and shook as we headed down cow-paths in search of our first night’s stop at a dilapidated (but free!) Aire in Voldomino. That out of the 20 or 30 spots, only one other camper turned up should’ve been telling, and the power didn’t work either. But free is free!

As in France, if you’re avoiding toll roads in Italy, going relatively short distances takes forever. The secondary routes wind and twist and have roundabouts almost every kilometre. We’d moved from one side of the lake to the other in about three hours. The second night in Italy was spent at a pay-per-hour Aire by a lake in Gavirate, behind a cafe blaring the rather awesome local radio station. 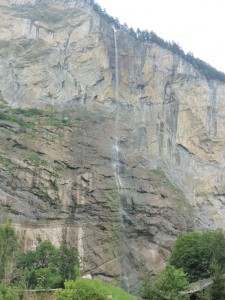 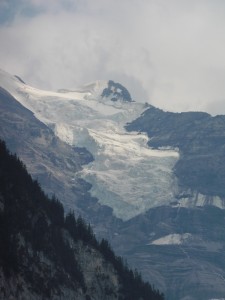 Lauterbrunnen: The waterfall – a little timid at the height of summer – and the giant glacier visible through the clouds

From Gavirate we drove to another pricey Aire by Lake Lugano. The area was a lot nicer, far more in keeping with our predictions of Italy (having only visited Venice and Rome before); crumbling Roman ruins, lush mini-castles, lots of pizzerias, chic looking people on Vespa’s. We were also treated to free fireworks across the lake. 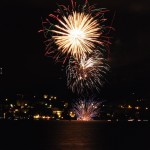 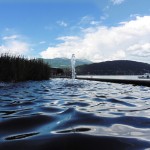 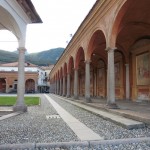 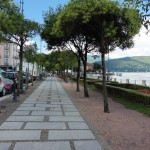 The financial and mental tolls of moving from Aire to Aire had been driving us a little mad for a while but as mid-August passed, the ACSI discounts began to recommence, and we opted to drive back into Switzerland, to a camp in Locarno.

Five days of rest were what we were in need of and Camp Riarena supplied this with perfect efficiency: Nice bathrooms, a warm-enough pool, good WiFi, and plenty of uninterrupted slumber. The only drawback was, initially, bad weather, which turned the soily ground into sludge. 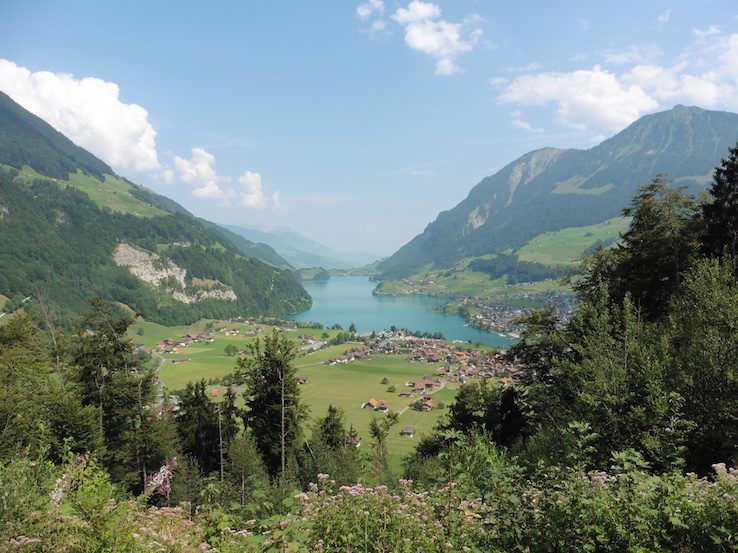 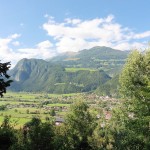 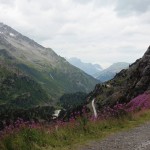 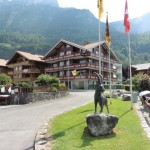 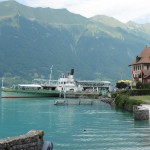 Some of Switzerland’s insane amount of amazing views

After resting up it was back on the road to carry on toward Slovenia. For the sake of available mileage, we chose to go via Italy rather than Austria and instantly regretted it with more of the terrible backroads and roundabout after roundabout. We were very close to punching the Nav system as it declared “at the roundabout…” every ninety seconds.

Fortunately, the roads began to improve as we left the lakes and tunnels around Como (which was no more impressive than Lugano or Maggiore, for all the attention it gets). We stopped for the night short of the Stelvio Pass at Tirano, a functional but expensive Aire in a pretty little town nestled between looming hills.

In the morning we tackled the Stelvio Pass, as popularised by Top Gear, and so now M25-levels of manic with everyone and their grandma wanting to say they’ve driven it. I merrily gave up driving duties to Andy, which entailed some three-pointers to get Scooby around some of the tight bends, but we saw several double-our-size campers and even a coach! From sunny high 20s at the bottom, the temperature dropped to just 9 degrees at the summit. 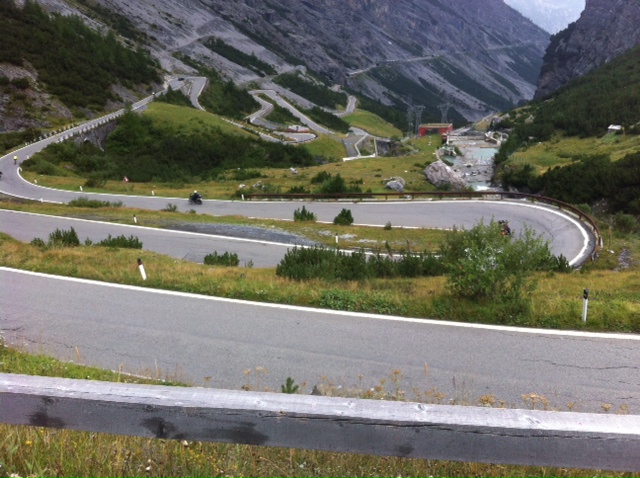 Stelvio Pass: The way up… 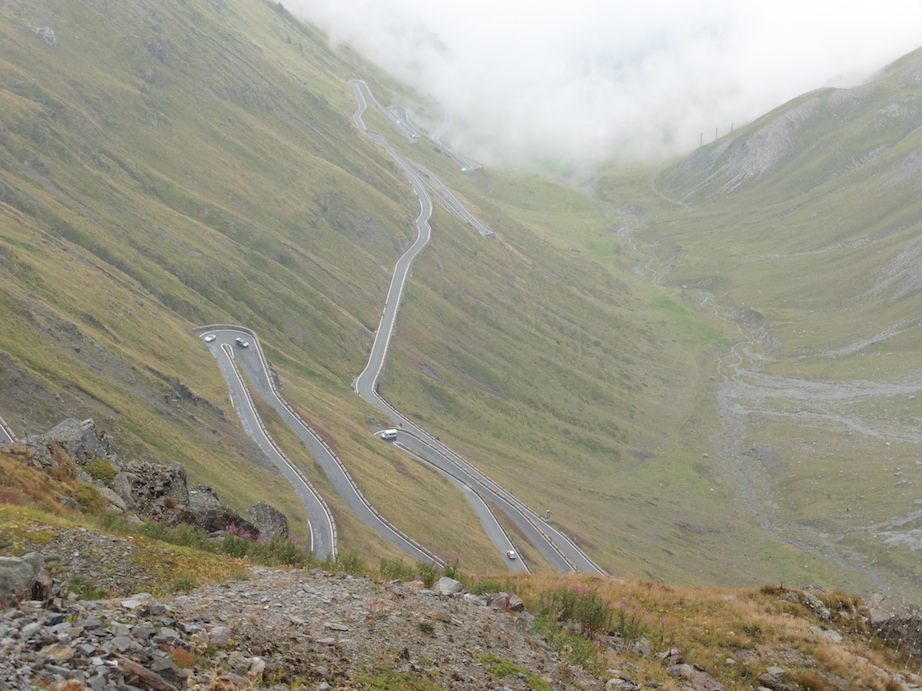 Our next designated stop was one of two free Aires in Bolzano, both of which ended up looking like we’d get murdered if we stayed, so we opted for a lakeside Aire about 10km south, which ended up costing 25% more than advertised, but at least we woke up intact.

The rest of the day was spent driving out of Italy and back into Austria, where we found a wild camping spot at a viewpoint halfway up a winding mountain road, complete with geckos on the trees and a breathtaking view of the valley below.