Leaving behind the wasteland Aire at Port Bacares, we were up and off early to tackle the border crossing to Spain. Though only about 65km away, the closer to the border we got, the more windy the roads became, a dizzy echo of the day stuck on the mountain passes.

As Scooby chugged his way to the peak where the border lay, passports, dog documents, and expressions-of-innocence were all ready… and then nothing. The border office was an abandoned building and that was it – we were in Spain.

Of course, the flip side of driving up all those windy roads is that you have to come down the other side. Unlike France, we didn’t have an Aires guide for Spain, only a few pushpins on our GPS, so along the windy roads we went in search of an overnight stop.

The first one turned out to be a supermarket carpark where camper parking is permitted – for €22 a night! Onward then. 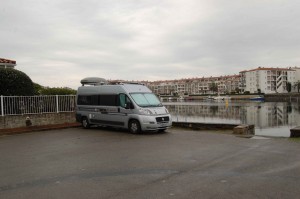 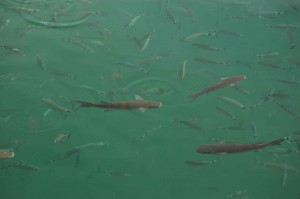 Eventually, we pulled up at a Lidl in Empuriabrava and found a small local car park a couple of streets over with a nice view of the marina and no apparent restrictions, and so it became our first night in Spain.

The following day we drove down to Pineda du Mar and stayed at a campsite a stone’s throw from the sea. Alas, the rain in Spain fell mainly everywhere whilst there, but hot showers, wifi, and a climate creeping towards not-cold compensated and, on the second morning, combats went back into the overhead and the shorts came out.

After two nights at the camp, we continued down to Sitges, familiar to us from last August’s sun-n-sea holiday. We knew just where we could park up in advance and enjoyed the nice 2.5km walk along the seafront into town and back. Neelix found a whole host of new things to pee on, doubtlessly the highlight of his day. 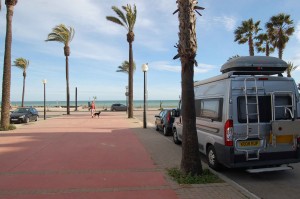 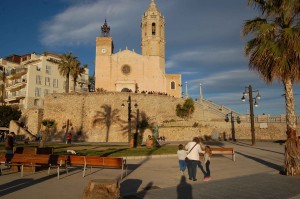 Alas, our planned X-weeks-free camping in Sitges was brought to a halt by rapping on the side of the van at 0830 on Saturday morning by a policeman who told us – and the two other campers – that such vehicles were not allowed in Sitges, despite no signs indicating this. 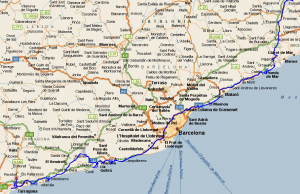 Peeved, we drove down a few miles to Torredembarra and set up in a beachfront campsite, where we’ve remained for the past week in the hope of getting a book delivery from the UK (the Aires!) in our paws before moving further south.

The last week has been relaxing, sunny – 18-25 °C  – and we’ve taken a few walks up and down the beachfront, visited the marina (where we spotted the Mick Jagger fish (top)), and got our teeth into writing, guitar, and various other need-to-do’s.

It is Saturday the 28th March 2015, and almost one month since we left our house in Brighton. If we hadn’t have left, I would be in receipt of the regular monthly pay packet for services to the corporate and the lack of it led me to some reflection and evaluation of the first month away.

My fear has always been that leaving our jobs would make us realise how much we needed the money, this fear an underpinning of the 9 to 5 ethos we have been trained to depend on.  There is an absence of the thing which provides a security and a comfort, it provides a mini ‘get out of jail free card’ for the problems of the month; a way to get out and enjoy a night out, to plug into the consumer joy machine of shopping, or to put towards a future day – a holiday or a big day out.

Reflecting, writing this it doesn’t feel like I have missed out, on the basis that a month of work constitutes 25 days of not doing the things you love (unless you are lucky enough to have a job you love!) and 8 days available for recovery and pleasure. The money is largely handed straight over to the establishment in the form of taxes and bills and the really precious human commodity, time… is spent to keep our heads above water – to keep in the game. Instead we have lots of time and little money, it puts things on its head, and things take longer, but there is a greater sense of personal freedom in the mix.

I am conscious that I don’t want all our blog posts to be a barrage of humblebrag, basically saying “what we did is the best thing ever”, but I hope that writing about our socially constructing attitudes to work, rest and play may evoke some reaction, perhaps even encourage someone to give up on the 9 to 5; to be brave, when all the signs are telling you to turn around.

It is certainly hard, we have had a really hard month, it hasn’t all been beaches and sunshine, we have had all manor of ‘signs from above’ that we need to get back into line and get back on the hamster wheel; but for me, the corner has been turned, with the weather on our side, with our experience growing in how to do this life, we are having an experience.

It doesn’t sparkle golden from every angle, every day has frustration and hard work, but the balance has shifted, it has moved toward something which feels more fulfilling, more important than societal patterns and ‘norms’. It may not be something we can do forever, but the objective of this is to do something fun, until it stops being fun and right now just like the payday lift, we are having a lovely lift of warm sunshine and being by the beach.

It is different, but comforting, affirming and brings with it the drive to push on into April and see what adventures that holds! 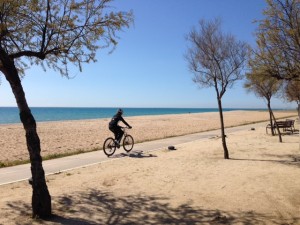 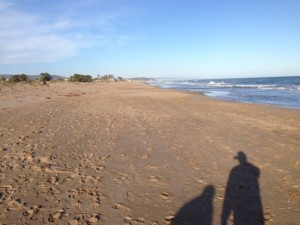 To ‘ease us in’ to life in a 6×2 metre van, we opted to spend the first week-to-10-days in the UK, doing rounds of friends and family to bid them farewell.

Two nights at Chrys’ parents, two at Andy’s sister’s, then a night each at Basingstoke and Eastbourne, a brave attempt at Wild camping on a beach at Pevensey Bay, then two nights at a campsite near Tonbridge before a final Wild night on Dover seafront before our 05:50 shuttle to Calais on the morning of March 12th.

Neelix T. Dog is, so far, bemused by the strange new quarters.

Arriving at Calais around 8am local time (after a 4.30am wake up), we’d long since plotted a route as far south as we could drive in one day, to reach warmer climes. A campsite in Vendee was to be our first night’s stay in Le France. This ultimately had to wait a day as driving proved so draining (and expensive), we ended up staying about an hour away from our destination, in a free Aire at La Roche-Sur-Yon. 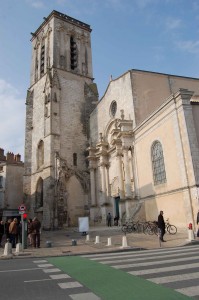 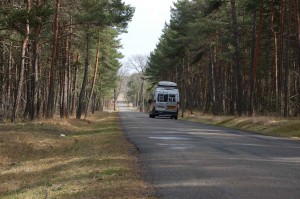 A €92 driving expense came from Toll Roads, a cost we underestimated, ramped up further by Autoroute taking us the wrong way and, when we left to rejoin the same freeway in the reverse direction, we were charged TWICE by the system, once for exiting, once for re-entry.

After about 7 hours rocketing south, with temperatures as high as 22 degrees according to the optimistic reading in the van (seems about 5 degs over the truth), we pulled into the Aire at La Roche Sur Yon, made some dinner and fell into a long, long sleep.

The following day, we took a walk through the town, which proved to be quite bland and uninspiring at best. Finding internet access was hard, and finding an open Boulangerie proved even more challenging. Of course, with dog in tow, curiously sniffing and then peeing on everything, nipping into shops requires a fair amount of compromise. 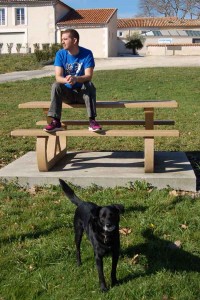 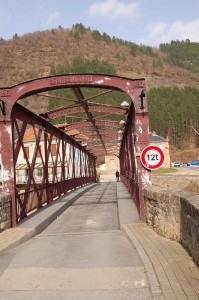 We lucked out with a small supermarket and headed back to the Aire, packed up, and drove another hour or so to Camping La Grisse in near-but-far Le Givre.

The camp was out of season and cold, heavy on the creepy, which, for me, is a plus. We paid for two nights with hook-up, but were disappointed to find that there were no hot showers, none of the on-site taps worked, and the reception was hardly ever manned so finding out the wifi password took most of a day.

On the Sunday, we drove to La Rochelle, which was mercifully populous (and open!!) enough to negotiate a couple of baguettes. The Aire here, albeit free, evidently hid its service points from the many campers in the parking lot, and we elected to move on to the next one, in the tiny village of Nersac, another hour or two’s drive south. 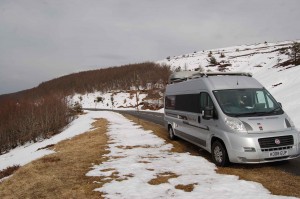 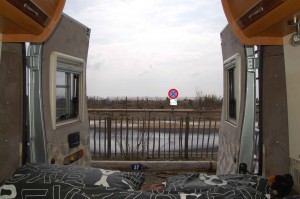 France is notable for some ultra-scenic drives when Autoroute is instructed to ignore toll roads, and we stopped several times over the next few days to take photos and breathe in some amazing sights.

These days took us south to Cahors, the the Alpine region of Florac, both of which rated high on the prettiness scale, but rain eventually scuppered the aesthetics. Leaving Florac provided us with the most adventurous driving day to date, along tiny, windy mountain passes that were more like tarmacked cow paths, going so high we found reached the snow. What Autoroute told us would be 2.5 hours ended up around 7.5, and we paid an expensive cost for an Aire in the town of Millau. 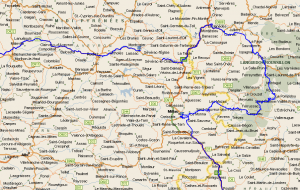 The hurrah moment of reaching the Mediterranean at Sete the following day was also marred when clouds came and it rained for what felt like forever. Still, I was hellbent on everything improving in the next few days. 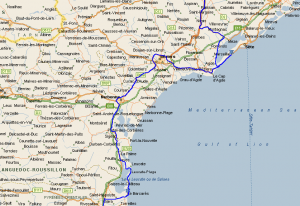 We spent one more night on route to Spain, about two hours’ from the border, in a post-apocalyptic excuse for an Aire, and drove the twisty, turny mountain roads once more to cross over into España! 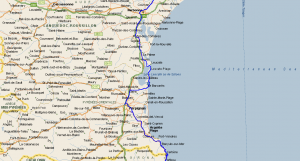