After being turfed out of Sitges by the fuzz, we drove down the coast a few miles to a campsite on the outskirts of Torredembarra, where we set about writing, setting up revenue streams, and waiting for a few deliveries to fix a couple of minor van problems.

The beachfront camp (separated from the sands by a fairly busy trainline), good showers, and general peace kept us at La Noria for a whopping 31 nights (discounted with our ACSI card, so we essentially got one week free).

Walks up and down the beach, gingerly paddling in the still-too-cold Med (though Neelix fell in after misjudging a sandbar), the sand there is strangely springy, half-swallowing the soles of your feet as you tread. Neelix was treated to long 8km walks to the marina and back, exploring a lighthouse, a quaint cove, and the sparse local commerce (pretty much just a Carrefour).

The laid back nature of the camp (or even Spain!) allowed us to drive in and out of the camp at will; a pilgrimage to Tarragona and Salou to find Autogas and scope out possible new camping spots punctuated the lazy days in the sun.

Once the Spain/Portugal Aire book, a replacement lappie charger, and a new gear for the van’s awning eventually arrived (a real bitch to find, eventually sent to us from Rose Awnings, Dorset), we made the necessary repairs and, slightly reluctantly, planned moving on from our quiet little Shangri-La.

First stop entailed a trip inland and up to the higher altitudes of Morella, a fortified town an hour from the sea. The free Aire there came recommended and boasted an amazing view of the town, which was replete with steep, winding streets, tiny alleyways, and artisan cheese outlets, at the centre of which looms an impressive castle. Neelix ignored much of this to bark at a cat.

The following day, we drove back to the coast bound for Peniscola (sadly not Pepsi’s new gay-centric coke), where we rolled up to a cosy campsite for a couple of nights and hiked the 1.5km to the promenade, which is largely a sprawl of giant hotels, iced off by the aesthetically pleasing castle that leans seaward, not dissimilar to Morella or Sitges. 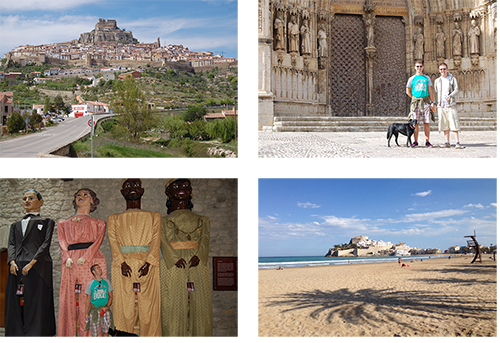 The closed-quarters of the camp meant that any regular level conversation could be heard, and proved ultimately a little off-putting after the Edenic ambience of La Noria, though Neelix enjoyed a wee-off with a yappy French dog (Britain: 1, France: 0).

Further south next, with one more delivery requiring a ‘stay’ at a camp (at Oropesa del Mar), and then the tempo will pick up as we round the coast to loop back up to cooler climes.